By crispysmokedweb on 12 January 2014 in Learning, Personal 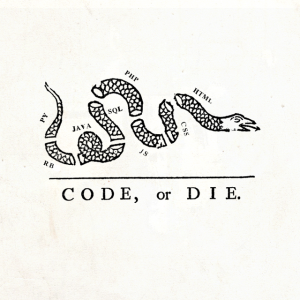 New Year may be an arbitrary line in an arbitrary system for measuring the passage of time (so reports Oliver Burkeman in last week’s Guardian magazine ), and the rituals of new year resolutions may seem doomed to fail. Nonetheless I decided to approach my Code Everyday mandate again with the renewed optimism that this season’s rituals bring about.
Code everyday has to be a specific activity, even if I have already completed some study/coding for the day. The aim is to write something that is new, or that enhances an existing program, every day, for at least 15 minutes, and that hopefully achieves some minor milestone.

Two weeks in (almost) and it’s going OK. I have managed to code 10 out of 12 days so far. Not only does this seem reasonably successful as a measure of whether I have done it or not, there is the hidden story of the enthusiasm and addictiveness of my daily geek-out. Unlike the self-punishment of giving up desirable vices, or undertaking exercise to balance the effects of the same, this is something I already really wanted to do, I just hadn’t made the space, developed a habit or simply given myself permission to do it.
I am happy enough with 83% success because the end is not the measure itself, but the actual benefits of regular coding, reinforcing my knowledge, solving problems, learning tricks and discipline, and having a reason other than the purely academic to learn a new command, feature, library or technique.

I overheard Charlie Brooker’s interview on BBC 6music this week, talking about the discipline of writing. His interviewer, Lauren Laverne, referred to the write-or-die method? Intrigued, I googled it to find that it is one of a few techniques and tools available to freelance writers who can face aching chasms of non-productivity, even in the face of deadlines and the risk of not getting paid. The app will, according to some parameters you set, start to delete pieces of the work you have written, unless you maintain a certain level of output. Pretty extreme, and there are more subtle options than this all-out Kamikaze mode, but it is something that the creative type will value above pretty much anything else – the very offspring of his or her own imaginative procreation. It is not the consequence that is important, rather the fear of that consequence that matters. The consequence itself just has to be scary enough.

Fortunately I don’t seem to need that level of motivation for my own code everyday endeavours. I just want to develop and maintain a certain level of comfort, competence and proficiency in an art I am only just beginning to learn.
That said, I could not help but investigate whether such an app exists for coders. I did not find anything specifically equivalent, but interestingly, the maxim
in various permutations appears as domain names, blog and post titles, and other references that imply more of a creed among the technorati, rather than a motivational whip. On planet geek, code-or-die suggests there is no fate worse than not being a coder, and therefore these motivational gimmicks are not needed.

I am not a writer, although I write. I am not a coder, although I code. So perhaps I can never appreciate the passions and frustrations of either camp. But I am happy to code everyday, as a means to developing my skills.