By cswmonkey on 9 February 2015 in General, Learning

Musings on a day at the UK and Ireland FLL finals, Loughborough, 1st February 2015 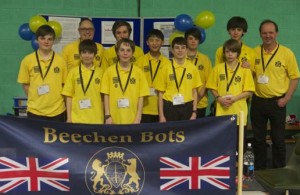 The day starts fast, and stays fast. The Beechen Bots are back at Loughborough University for the FLL UK and Ireland National championships, following success last year that earned them a place in the OEC in Spain.
There are 35 teams here, and the pit area fills up shortly after 8:30 and gets setup pretty quickly. There’s no time to think as our first round is on directly after the opening ceremony. 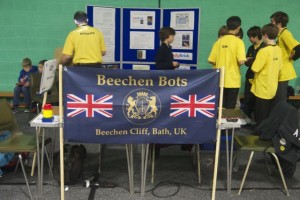 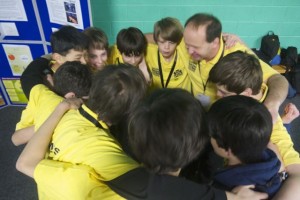 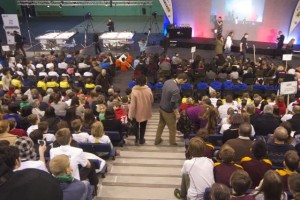 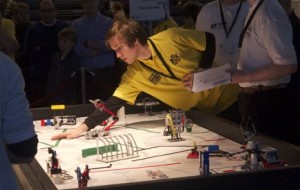 And it’s not a great first round I have to say. A mere 130 when we know we can get 400+. Still, no time to worry, as we are straight into core values and team judging.  Back to the pit for a few minutes before a couple of much needed sessions on the practice tables. It is not helping as much as we would like. Like everyone, we find the subtle differences in the competition arena leave our (normally reliable) runs adrift. We manage a bit of fine tuning of one of the runs, then strike out for our second round. Not much better. Grrrrrr! So then we are into the robot design judging. I have to say that, while the judges clearly take their job seriously, they take great care to put the teams at ease so they can just concentrate on the discussion in hand.

After a very brief break, we are off to the project presentation. The boys absolutely excel at this. Great role play performance – fun, confident, clear, and loads of engagement with the judges. Terrific!
Finally we get a gap longer than 5 minutes, which means we can stuff a sandwich down our necks, fill out the sponsors prize entry forms, and plan tactics for the final round which just has to count.
Another practice session, and we have an EV3 brain freeze. Nightmare!  We have a spare, but the changeover (as slick as an F1 pit stop guys) was fast but it still ate into the valuable practice slot.

Well now it’s all or nothing for round 3. Tension, excitement, everything crossed, but alas, it’s another mediocre run by our robot.
We have been doing this long enough to know that its always like this. Lots of variables that you cannot, or just did not , account for back home. Your cast-iron-reliable run dissolves into a slipping, confused, lost robot. But this is engineering: expecting and overcoming the unexpected.
I have to say that the boys maintained their steady, calm, happy demeanour all day. No matter who is MC’ing, you are probably never going to get our boys singing, dancing, whooping, screaming like some of the more gregarious teams, but they hold their nerve and are cool as they come when it matters.
The plus side was we could now concentrate our efforts on supporting C14 in the knockout rounds, and take the time to look at and appreciate the robot designs and runs that other teams had made. 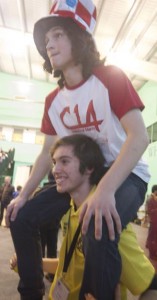 C14 were formidable in the knockouts, and they must have done pretty well in their core values and project because they stormed home as Champions as well as winners of the robot rounds.
In the (mysterious) absence of an OEC in Europe this year, C14 are one of two teams to go through to the US world championships, for which we wish them the very best.
This was, as always, an exciting and inspirational day, and we now have the rest of this season to dust ourselves down, think and test our way around the problems, and come back stronger than ever for Trash Trek next year.
Well done to all the organisers, volunteers and teams for a terrific UK season, and for making the atmosphere so great. 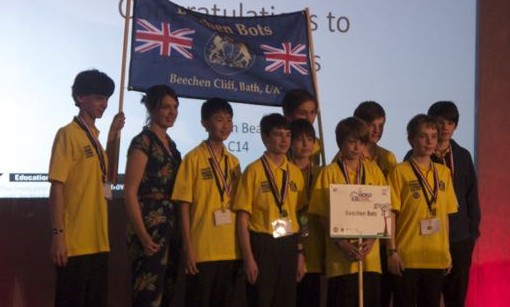 Google DevArt and Digital Revolution
AI that even my flawed human brain can grok – just!