By crispysmokedweb on 3 June 2014 in Learning, Personal

Robots or Humans? At the Open European Championships of the First Lego League (FLL OEC) in Pamplona Spain last week, it was definitely the young humans in the lead, while the impressive robots took second place.

On the face of it, FLL is a competition in…

And in actual fact this is what all 850 children from 96 teams and from 42 countries have been working on to get this far, and these remain their main focus while they were in the Baluarte conference centre for around 11 hours a day for three days.

But there was something else going on as well. A collection of bright, highly motivated and well-prepared 9-16 year olds from all these vastly different cultures, but with shared interests, in one pretty intense melting pot, all demonstrated both what was different and what was the same about children from around the world. And, whether they knew it or not, they were creating a pretty solid foundation for their own futures.

I love technology, and there was plenty to see here, but that was secondary to the much broader set of capabilities the children needed to compete at this level.

The organisers worked hard to facilitate networking among the teams, through friendship rituals and parties, and there was no doubt that some lifelong friendships and maybe even a couple of romances were germinated in the Baluarte last week. You would have to have gone out of your way to not connect with someone from another country you wanted to stay in touch with. 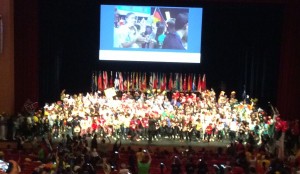 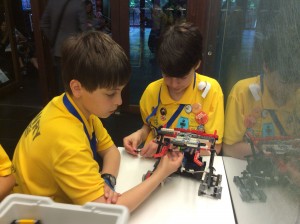 So, back to the competition. While everything I have just talked about matters, everyone was there to compete, and to win. Even getting a slot on the practice tables was a competitive affair, and even in between the competitive heats, the teams had to stay on guard as you never knew when the judges were going to come and asses your display stand in the pit area. On the competition tables the teams never actually compete head to head with each other. It is all about the scores your achieve, and those are not finalised until they have left the tables. Out of three rounds, a team’s best score decides whether they make it into the top eight teams for the quarter finals, which are then eliminated down to the final two and the Champion’s Award. But there are twelve other categories in which teams are judged, across all of the technical, behavioural and team related qualities discussed above. The teams had to present and be questioned on their project solution, their robot design, and they had to discuss and demonstrate their interpretation of the FLL core values. 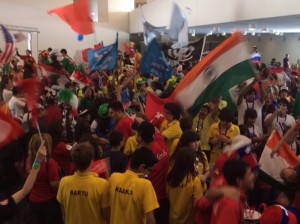 The energy in the place just did not dip for the three days, except perhaps for the adult coaches and supporting parents. Within the pit area, the stands were fabulously decorated, and celebrated facets of the team’s home nation, in most cases with give-aways of sweets, national foods, badges, pens etc, all of which encouraged a constant mixing in-between competitive events. Many of the teams had chants or dances and took these on tour around the venue, encouraging others to join in.

You cannot help but get caught up in the vortex. It is a taste of the future, not because of the technology, but because of the spirit of can-do, get-it-done, resilience in failure, and friendly competitiveness that flowed among the young teams. The First Lego League’s motto is Sport for the Mind, and that is exactly what you saw in action at the FLL OEC 2014 in Pamplona.

PS. This is what the Soul of FLL looks like, as reproduced by the850 young people at the FLL OEC 2014, in Pamplona, Spain. 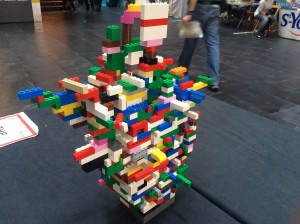 This is the Soul of FLL after 850 young people added their bricks.